XEROX AND FUJI ARE ‘SWINGING A SHORT STICK HARD’

The battle around the Fujifilm/Xerox/Fuji Xerox transaction may negatively affect the public and financial community’s impression of the entire print industry. Print professionals should not be caught off guard if customers mention the transaction.

As such, we have developed a series of commentaries to keep print professionals fully informed of the transaction’s legal and financial details.

Your thoughts on this topic by Liking or Commenting are appreciated.

Darwin Deason, a long-term and third-largest shareholder of Xerox Corp. (“Xerox”), issued the following statement in response to Xerox’s public comments and Reply Briefs filed today with the Supreme Court of the State of New York, New York County:

“As they say in Texas, Xerox and Fuji are ‘swinging a short stick hard’ in this case. A whitewash defense won’t work here given the hundreds of documents, text messages and emails from the directors, Mr. Jacobson, and Fuji that establish every fact in my complaint.

If Mr. Keegan is concerned with ‘omissions’ and ‘distortions’, then why did he and Mr. Jacobson redact facts as big as Texas that are highly material to me and other long-term and long-suffering shareholders – just like they did with the crown-jewel lockup?

Answer: Because they are hiding and continue to hide incredibly harmful facts that are damaging to their credibility and contrary to their public statements.

I have attached what I told Xerox in my deposition – in no uncertain terms – what I think about this deal and the process that led to it.”

The following bylined article by Mark Michelson, in the April 16 Printing Impressions newsletter, provides some of the latest accusations levied by Darwin Deason. 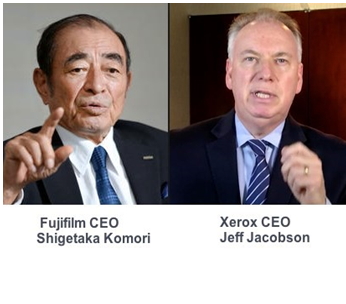 Xerox CEO Jeff Jacobson continued to pursue an acquisition deal with Fujifilm Holdings, even after the Xerox board of directors instructed him to halt negotiations last November, and at the same time that the board was considering replacing Jacobson with a new Xerox CEO.

Those are just some of the latest accusations levied by Xerox's third-largest shareholder, Darwin Deason, as part of an amended complaint (click here for  PDF) filed April 15 with the Supreme Court of the State of New York, County of New York, in support of a lawsuit he initially filed to block a $6.1 billion deal consummated Jan. 31, 2018, which would enable Fuji to acquire a controlling stake in Xerox essentially by combining the U.S.-based Xerox into their long-standing joint venture, called Fuji Xerox.

The proposed transaction is structured whereby Fuji Xerox will become a wholly-owned subsidiary of Xerox, with Fuji acquiring a 50.1% ownership interest in Xerox and Xerox’s current shareholders owning the remaining 49.9% of the company. Fuji, in turn, will acquire its majority of shares of Xerox by giving to Xerox Fuji’s 75% ownership interest in Fuji Xerox. The acquisition will also require approval by Xerox shareholders.

Robert Keegan, chairman of the board of Xerox, contends that Deason’s litigation distorts many of the facts regarding the proposed combination with Fuji Xerox. "Xerox strongly believes that Mr. Deason’s lawsuit is meritless and it will vigorously defend itself in legal proceedings," he said.

"Xerox’s board of directors followed a comprehensive process in reaching its decision to approve the proposed transaction, including a comprehensive review of the company’s strategic and financial alternatives, as well as potential transaction structures and negotiations with Fujifilm over a 10-month period," Keegan added. "Xerox CEO Jeff Jacobson was fully authorized to engage in discussions with Fujifilm and Fuji Xerox on the proposed combination."

Xerox has filed a preliminary proxy statement with the SEC (click here for PDF), which also describes the impetus behind what drove the transaction and provides its version of a timeline of events that led up to it. By contrast, Deason issued his own timeline of what he claims occurred leading up to the Xerox/Fuji agreement and a summary (click here for PDF) of key findings spelled out in his updated complaint.

Deason is also seeking to nominate his own slate of Xerox board of directors in advance of the yet-undetermined 2018 Xerox annual shareholder meeting, despite the fact that the Dec. 11, 2017, advance notice had passed as stipulated in Xerox's bylaws - claiming that the Xerox board approved the acquisition and released a key "crown jewel lock-up" revelation after the Dec. 11 date had passed. (Deason has also reached a pact with Xerox's largest shareholder, Carl Icahn, who did submit four nominees for Xerox board positions prior to the deadline. Combined, Deason and Icahn hold a reported 15% stake in Xerox.)

Deason's lawsuit also claims that the Fuji/Xerox transaction was the result of a "fraudulently concealed 'crown-jewel' lock-up." It contends that Xerox's board had the ability to terminate its nearly two-decade joint venture agreement, as the result of a large accounting scandal that occurred at Fuji Xerox under Fuji's watch, prior to its acquisition negotiations with Fuji or other potential suitors. Instead, it contends, Fuji now has permanent control of intellectual property, as well as the licensing, manufacturing and selling of its products in the fast-growing Far East and Pacific Rim markets.

To review our previous Commentaries on this topic: 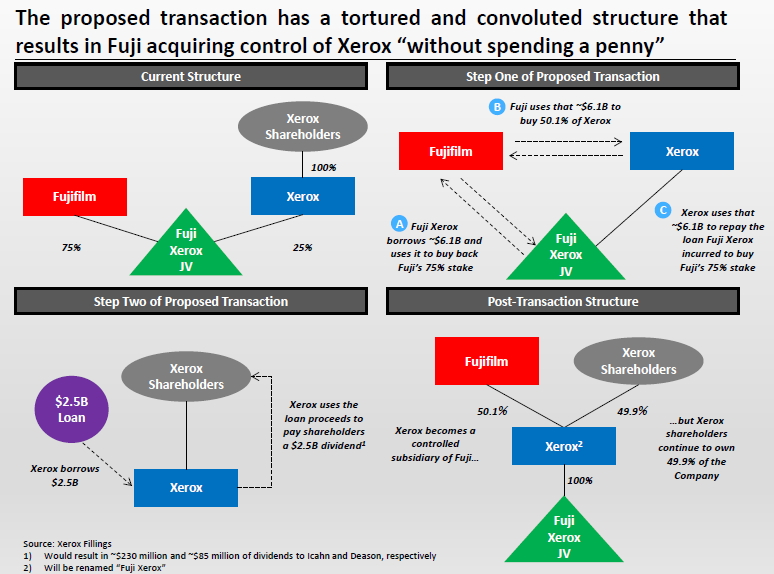 Therefore, we trust our continuing reports provide you information of value related to the Fujifilm-Xerox-Fuji Xerox merger dispute. Your thoughts on this topic by Liking or Commenting appreciated.