Look Over Here….Not Over There…..!

“The greatest problem in communication is the illusion that it has been accomplished” ……………. George Bernard Shaw

We learn to avoid the truth….and how to avoid what needs attention.

How well I remember the owner saying, “Now is not a good time for a Customer Survey for us.”…….His rationale?......”We wouldn’t get good results…high evaluations… and good comments from our customers.”

Then there was an owner… and… association executive – neither of whom wanted to address “Succession Planning” – a truly creeping “death-threat”… to our great industry.  The owner felt he had a few more years before he’d be forced to discuss those issues – he liked being president and coming to his office. And the association executive had learned that the way to keep his job …was to avoid unpleasant subjects and keep the social calendar for members and their spouses -- active.

Then there was the “Sales Manager” who liked to hire “retread Sales Reps”, release them after about a year, but keep their accounts – either as “House Accounts” – or for himself…and his CSR (someone needs to service them). He also “qualified” all prospects, who called in. That pattern kept sales costs down,  kept his income and schedule full, and kept his Sales Reps catering to him… for “new Leads”.  If he awarded a Lead, he leaned toward giving it to a struggling new Rep, who seemed to have great trouble following up, and not giving the Lead to their top performer, who followed up on everything, and whose customers loved her.

I heard that an itinerant consultant recently stopped in, without an invitation. In the course of discussions, he asked the owner how many “Neglected Customers” they might have. That consultant went on to remark about “Inside Sales Reps” renewing neglected customers, and that census data indicated that this region was significantly ahead of the U.S. average - in new business start-ups. Then he mentioned that their local library’s Databases could show, in detail - what new businesses were starting up, by industry.  This was all new to the owner – and truthfully, he was skeptical, preferring to believe that the consultant was just looking for more work. Neither his Reps nor his Sales Manager had ever mentioned using Databases at the local library. (That’s where you went to check out a book, rather than buy it, wasn’t it?)  And… his local association had never mentioned or offered a training session re. Databases...for uncovering targeted new prospects…! 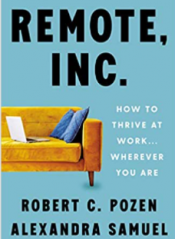 For too many owners, local Recruitment Service Bureaus were not generating anyone worth interviewing, who could pass a drug test, or worth hiring, especially as a Sales Rep Trainee. Yet, The Wall Street Journal was running what seemed like a “marathon series” on almost unlimited opportunities - for successfully hiring people to work – often remotely. (Over 4.3 million people quit their jobs in August, The WSJ recently reported.) This owner had not started reading,  Remote, Inc. (by Robert C. Pozen and Alexandra Samuel) – a core “must-read” – for finding – and retaining - today’s talented employees – who don’t live next door.

“Internal Sample Libraries” at a recent client were reported - all but empty…Reps had gotten out of the habit of asking for Samples. Requests over the last year from prospects and Customers went embarrassingly – unfilled.  (Just didn’t seem as important as it once was.)

Developing organizational integrity requires many skills and qualities, including accountability…collaboration….and continuous improvement - from the entire Team.

In today’s environment, we gain nothing but contempt, and lost talent – avoiding the issues…….while looking busy.

This Pandemic has allowed folks time to ask themselves, “Where are we going, what are we trying to accomplish, why should I stay here….?”

Does every employee have assignments of what they should be improving? Are their suggestions and questions….encouraged?

Every Employee Survey we ever administered…uncovered major surprises… to senior management…who when reflecting on results…said it was true.

What we avoid, or happens in the darkness of night, eventually sees the light of day.

“Happiness lies not in the mere possession of money; it lies in the joy of achievement, in the thrill of creative effort…”…Franklin D. Roosevelt, The New Deal, Speeches That Made History