What Did Our Leaders Trade…..

“…I have, myself, full confidence that if all do their duty, if nothing is neglected, and if the best arrangements are made, as they are being made, we shall prove ourselves once again able to defend our island home, to ride out the storm of war, and to outlive the menace of tyranny, if necessary… for years… if necessary… alone….We must be careful not to assign this deliverance the attributes of a victory. Wars are not won by evacuations…”…Subsequent to successful evacuations from Dunkirk, Winston Churchill, June 4, 1940, “We Shall Fight On The Beaches” 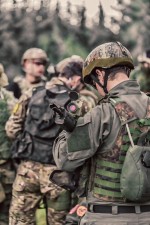 We are observing, via modern telecast reporting, a country fighting for its life, for its very existence. Families are breaking apart, as women and children catch trains to the West, and Dads and sons turn to go to war, knowing their probable odds.

I have questions… that haunt me.

Aren’t they also fighting… our battle…?

If not for Ukraine, then us…?

Isn’t it in our interest, as a country…with significant resources……as a great print and publishing industry….to get involved…?

What is our debt… to have persuaded Ukraine to give up their nuclear weapons…?

In a previous life, as my company was frequently operating on “the edge”, I made sure everyone understood that we would prevail – if each of us gave our best – every day….no exceptions.

We were to also be alert to teammates who were struggling, to give them a lift, a shoulder, if one was needed.

We pushed everything to its limits….and ultimately, we tripled revenues… in three and a half years.

e and credible nuclear deterrent so that those weapons are never used…” (I must have missed that Report from our political leaders.)

To hold back anything needed by the Ukrainian people, at this critical juncture, is to tempt - “Snatching Defeat - from the Jaws of Victory.”

“Dynamite in the hands of a child,” wrote Winston Churchill, “is not more dangerous than a strong policy weakly carried out.….And America today lives with the consequences of emboldened adversaries and shaken allies”….Gen. Jim Mattis, Call Sign Chaos,  p.228.