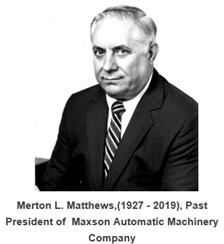 Born 31 July 1927 in Westerly RI, Merton enlisted in US Army in 1944 and was honorably discharged in 1947.  In 1950, Mert earned his Mechanical Engineering degree from the University of Rhode Island and then joined his father at Maxson Automatic Machinery Company in Westerly RI a manufacturer of sheeters for the paper and board industries.

In the family firm, Merton accepted increasing responsibilities of Chief Engineer, Vice President, President and Board Chair.  After his retirement in 2000, he continued as Board Chair Emeritus advising his son Joseph Matthews who succeeded him as Chief Executive Officer.

During his tenure, the Company expanded its facilities eightfold.  Under his guidance, Maxson grew to be a global supplier of sheeters for the paper mill, converting, printing and specialty industries.  He was a life long member of the Technical Association of the Pulp and Paper Industries.

Merton was buried on 05 February 2019 with full military honors next to his wife of 62 years Catherine Matthews.