How Important Is It That Your Employees Feel Valued …?

“He had a unique understanding of how to integrate art and commerce…to make the world a better place….”…Quincy Jones Eulogy for Ken Kragen

Ken Kragen would have been an outstanding commercial printer.

The organization that has lost sensitivity to the importance of how their personnel feel about their company – is paying a price through lost personnel, and inevitably - lost business.

The U.S. Labor Dept. said this week there were 10.6 million job openings - at the end of November.

Job-search site “Indeed” reported this week there were 12 million job openings at the end of December (The Wall Street Journal).  (Biggest turnover of personnel is occurring  - at beginning job levels.)

An unusually bright company president in one of our Peer Groups, on suddenly losing two excellent, experienced, long-term managers, realized that his company’s significant recent growth curve was in jeopardy.  He didn’t have time….couldn’t risk:

He reviewed his options, repeatedly…..updated his Position Descriptions for each manager, and posted the openings on his employee bulletin board. 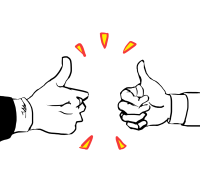 After a short wait, he approached his two top internal replacement candidates, reviewing with each of them their most recent Performance Reviews, and asking each of them if they’d consider the promotion, while promising them support, and expressing confidence they could each do the job.

They both, individually, accepted.

History - of many designs,  and my experience - is that there’s almost always at least one - successful strategy…. waiting to be revealed.

On reflection, that company president renewed his previously recognized value,  at critical moments,  for:

Such practices also have recognized value…. with your… smartest and largest customers… target prospects…and…. prospective employees…!

“Superiority of numbers – is not required”……The Art of War, Sun Tzu.